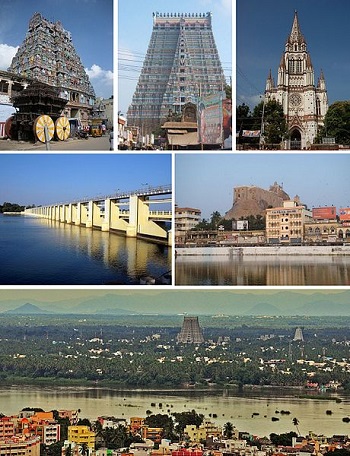 Tiruchirappalli, fondly called as Trichy is one of the important districts of the southern state of Tamil Nadu.

What is more, Trichy is reckoned as the fourth most prominent municipal corporation and the fourth most magnanimous urban agglomeration (extensive urban centre or town region consisting of the built-up surface area of a primal place) in Tamil Nadu.

The district is looked at as an important industrial hub in the state as the presence of industries and factories like Bharat Heavy Electricals Limited (BHEL), Golden Rock Railway Workshops, Ordnance Factory Trichy (OFT) and Heavy Alloy Penetrator Project (HAPP) plays a crucial role in the state's economic system and provides employment to thousands of people.

Trichy: Past and Present

Trichy is valued for its age old character as the region has been under the domination of all three major Tamil kingdoms namely Cholas, Pallavas, Pandyas and many other illustrious kingdoms which include the Carnatic state, Nayaka kingdoms, Sultans, Kingdom of Bisnagar and finally under the mighty British rule. Also, Trichy acted as a determinative topographic point during the wars between British and the French East India companies. It is significant to note that the capital city of Chola dynasty (one of the longest-ruling dynasties in the history of southern India) dated back to 300 BC was “Woraiyur or Urayur” which is a part of contemporary Trichy district.
Click here to read more on Trichy history.

Trichy city is located almost at the geographical primal point of the southern state of Tamil Nadu. The territory rests between 10.8050°N of the northerly line of latitude and 78.6856° E easterly line of longitude. Estimating the statistical average, the natural elevation of the city is pointed at 88 metres. Trichy spread over an area of 146.7 square kilometres abutted on the east by Thanjavur (Tanjore), on the west by Karur, on the compass north by Salem, on the south by Sivaganga and Madurai, on the north-east by Perambalur, on the north-west by Namakkal, on the south-east by Pudukkottai District and on the south-west by Dindigul District.

Trichy does not shorten its list of popular tourist attractions just with religious sites, but it extends a wide range of many other tourist options such as Ponnaniyaru Dam, Thalamalai, Government Museum, Mukkombu picnic spot, Puliancholai picnic spot and a lot of other attractions. What is more, Trichy is a paradise for shopaholics as Singara Thope, NSB Road, Burma Bazaar in Teppakulam houses countless small and big sales outlets where one can get anything to everything.