It is a long-familiar fact that Tiruchirappalli, often called as Trichy with fondness by the Tamil speaking population living all over the world, is a renowned temple town. The region is dotted with several historic temples across the length and breadth that receives hundreds of thousands of visitors and devotees from all over the world, throughout the year. Many people who adhere to Hinduism believe that Trichy is a gifted land that is endowed with numerous historic temples that holds a very special place in the unceasing list of most significant Hindu temples of Tamil Nadu. 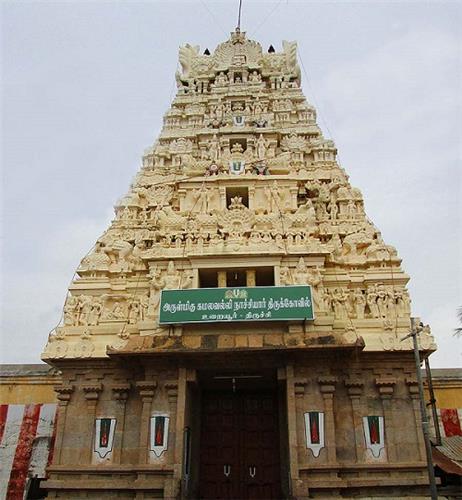 Trichy is the home of a lot of Perumal temples that are a part of the celebrated 108 Divya Desam temples dedicated to Lord Vishnu. Azhagiya Manavala Perumal Temple in Woraiyur (a suburban area of Trichy), a Divya Desam temple is dedicated to Lord Vishnu and Goddess Kamalavalli Nachiar is one among the must visit temples of Trichy. It is significant to credit that Woraiyur Azhagiya Manavala Perumal Temple is the only temple among the 108 Divya Desam temples where the Thayar (Goddess) is facing north, which is the direction of the Sri Ranganathar Swamy of the illustrious Srirangam Sri Ranganathar Swamy Temple (approx. 6.5 km). 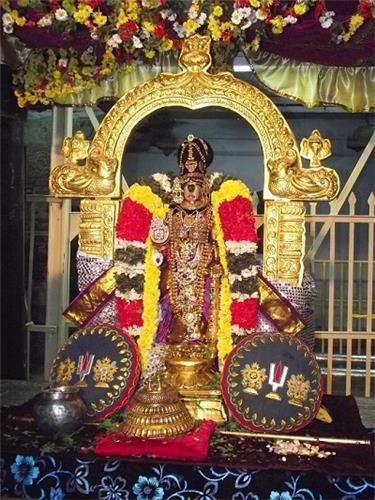 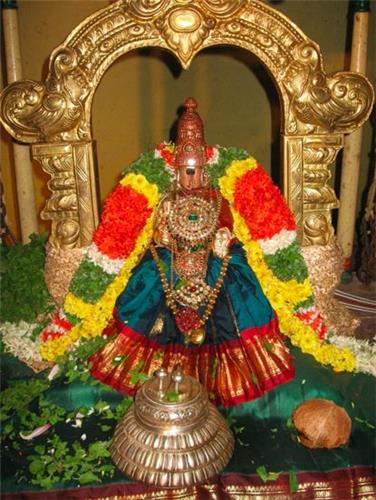 There was a time when a number of Hindu sages were talking about the greatness of the Hindu trinity, Lord Brahma, Lord Vishnu and Lord Shiva. The rishis ended up in a disputation about the greatest among the Trimurti. When the discussions took place, Maharishi Bhrigu was passing by and the confused sages decided to take the help of the Maharishi Bhrigu to find out that who was the greatest among the trinity. Upon being committed with the task, Maharishi Bhrigu visited Mount Kailash, the holy abode of Lord Shiva. The dwarapalakas (gatekeepers for divinities) denied entry to the Maharishi as Lord Shiva and Goddess Parvati were alone and it was not a good thing to disturb them. 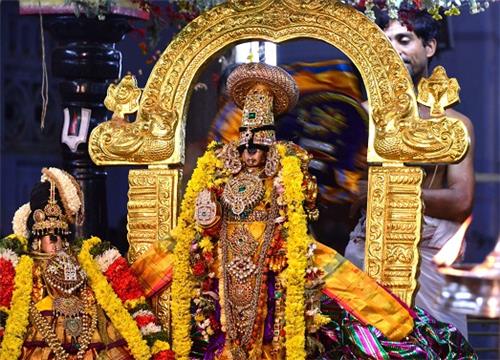 The disappointed Maharishi then decided to visit Brahmaloka. On entering the abode of the god of creation, Lord Brahma was engaged in creation and he did not even receive the Maharishi. The baffled Maharishi then proceeded to Vaikuntha - the abode of Lord Vishnu. Contrary to his two other visit, the Maharishi Bhrigu was well received and hospitality shown by the preserver of the universe was outstanding. The pleased Maharishi wanted to have some time alone with Lord Vishnu. Everyone else left the place except Sri Lakshmi, who lives in the chest of the lord. This enraged the Maharishi who ended up in cursing the goddess that she would soon be born as a human being in the material world. 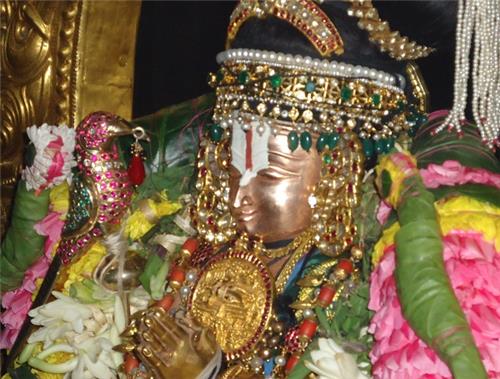 Notwithstanding, Maharishi Bhrigu reached a decision and declared that Lord Vishnu is the greatest among the trinity as he offered much respect and responded with decorum. The disheartened (cursed) goddess was pacified by the lord. Furthermore, the lord asked the goddess to reach the material world as a daughter of the Chozha king Nanda Chozhan and also assured that he would come after and marry her in a prosperous spot, before long. The Chozha king recovered the baby from a lotus tank and named the child as Kamalavalli. Later, goddess Kamalavalli fell in love with Srirangam Sri Ranganathar Swamy and joined him in a holy matrimony. The Chozha king constructed a temple to mark the auspicious occasion. This far-famed temple is believed to be in existence from the 7th century. 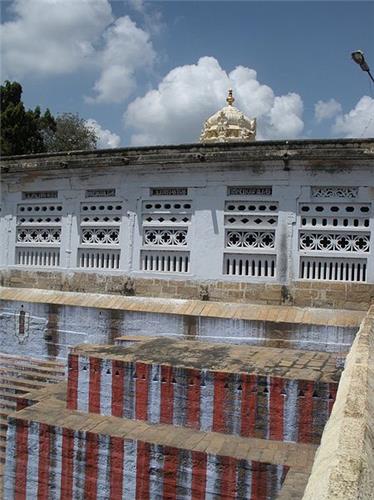 Every year, during the Tamil month of Panguni, on an auspicious day, Namperumal (the festival deity of Srirangam Sri Ranganathar Swamy temple) leaves the Srirangam temple early in the morning to cross the River Cauvery in a decorated golden palanquin and reach the Woraiyur Nachiyar Kovil to meet the goddess. The entire holy matrimony routines between Namperumal and Kamalavalli Thayar is enacted and both the idols were placed in the ‘serthi mandapam' in the Nachiyar Temple for worship by thronging crowds. This unique appearance of Namperumal of Srirangam Sri Ranganathar Temple and Kamalavalli Nachiyar of Woraiyur Nachiyar Kovil together is called as 'Serthi Sevai'. After the 'Serthi Sevai', Namperumal goes back to his abode at Srirangam on the same night, every year. 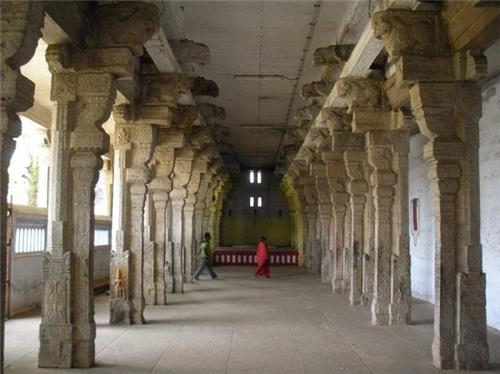 Among the 108 Divyadesam Temples, Woraiyur Kamalavalli Nachiyar Temple where the goddess (Sri Kamalavalli Nachiyar) is facing north, which is the direction of the Sri Ranganathar Swamy in the Srirangam Sri Ranganathar Swamy Temple. People who face issues in their married life or people who face delays in marriage visit this temple and perform poojas for the goddess. As this temple is the place of birth of Kamalavalli Thayar, all prominence is extended to the goddess. As a matter of fact, the temple has the festival deity only for the Thayar and none for the Azhagiya Manavalar. Besides, on the auspicious day of Vaikunta Ekadashi, opposed to the age-old practice, Sri Kamalavalli Thayar has the privilege of coming out of the 'Sorga Vaasal', instead of Lord Vishnu. 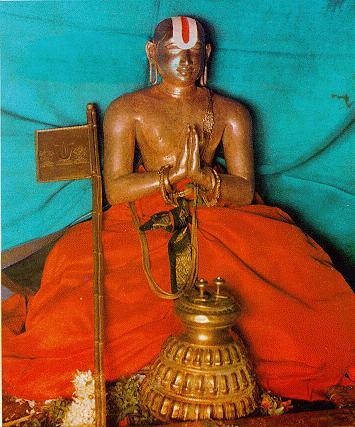 Sri Azhagiya Manavala Perumal Temple is believed to be the place of birth of Thirupaanazhwar (2760 BCE), one of the 12 Azhwar saints who gave Amalaanathi Piraan to the world. The temple is also glorified in the sacred verses of the Nalayira Divya Prabandham. The temple is so special that during all the festival and auspicious days, the first privilege is given to Kamalavalli Thayar, which is probably a unique occurrence for a Vishnu temple in the country. The presiding deity, Sri Azhagiya Manavalan offers his blessings in 'Nindra Thirukolam' (standing posture) holding shankha and chakra (conch and discus) and in abhaya hastham posture. Thayar Kamalavalli also known as Uraiyur Valli offers her blessings in 'Veetrirundha' (sitting posture). The temple also houses many other sannadhis for Nammazhwar and Sri Ramanujacharya, Udayavar.


Nearby Places of Interest: