The rock fort city of Tiruchirappalli is popularly regarded as a pilgrimage destination for its innumerable temples, churches and mosques dotted across the length and breadth of the district. The neighbourhood of Trichy, Srirangam is a pilgrim's paradise as the island is the proud home of the Sri Ranganathar Swamy Temple (foremost of the eight self-manifested shrines, that is, Swayam Vyakta Kshetras of Lord Vishnu and first and foremost among the 108 divya desams). 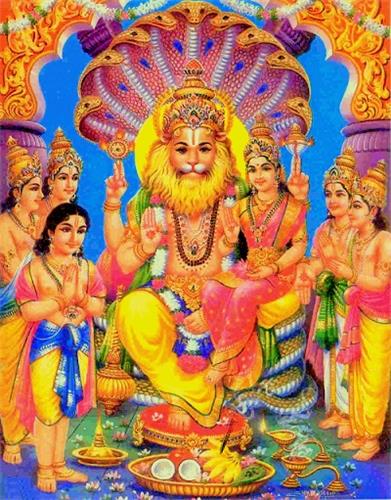 The Kaatazhagiya Singaperumal Temple was constructed by the Pandya King Vallabhadeva and the temple has a baronial 'vimanam' - the sacred (grand) tower that tops the innermost sanctum sanctorum of Singaperumal. The region was once a dense forest land, bordered by two large natural streams of water, namely River Kaveri to the south and the Kollidam River (Coleroon) to the north. Furthermore, the area was primarily populated by 'rishis' (sages) and their families. From time to time, wild animals of the forests would trouble the families of the sages. 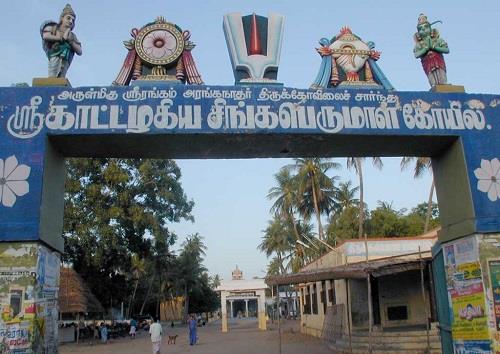 Although the sages living in the area featured the ability to burn down the wild animals, they decided not to use it against the animals and to lose the fruits of their 'kadum thavam' (penance). Alternatively, the sages attempted a more serious kind of penance appealing the graces of Lord Narasimha - god of protection and an incarnation of Lord Vishnu. On noticing the penance of the sages, Lord Narasimha appeared offering auspicious sight (visions of the divine) to the sages.

As per the prayers of the sages, Lord Narasimha stayed there forever with Goddess Lakshmi protecting the people who pray at this place in a dedicated manner. As the almighty himself appeared here in the midst of the dense forest and stuck around to shield the people from danger, injury, destruction, or damage, Lord Narasimha came to be known as ‘Kaatu’ Azhagiya Singa Perumal, where the word Kaatu can literally be translated as forest in English. Several other stories are also stated regarding the history of this temple. 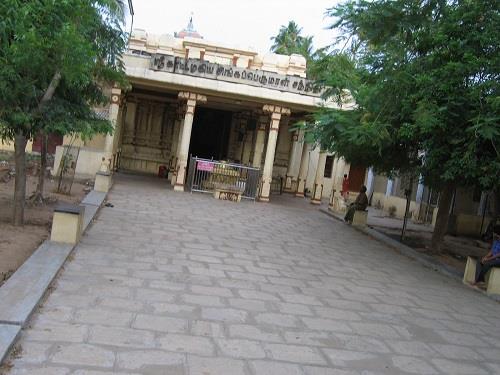 Unlike other Hindu temples in the state, the 'urchava/utsava murthy' (festival deity) of the Kaatazhagiya Singaperumal Temple is not found inside the temple complex. Instead, the festival deity of the singa perumal koil is placed inside the Koorathalwar shrine in the Srirangam Sri Ranganathar Swamy Temple. 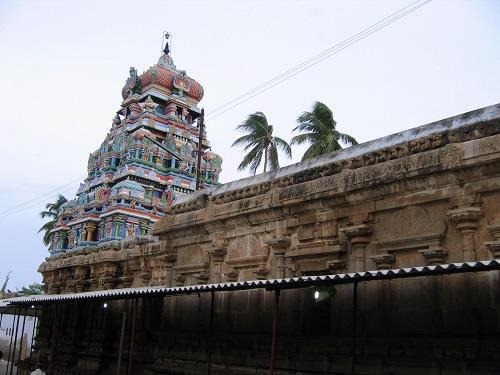 As the Singa Perumal Temple was located in the middle of a dense forest, the festival deity was placed in the Ranganathar Swamy Temple for safety purpose. The age-old tradition of keeping the festival deity of the Kaatazhagiya Singaperumal Temple in Srirangam Sri Ranganathar Swamy Temple is followed even today. The temple also houses a separate shrine for Garudalwar (the divine vahana of Lord Vishnu).

The urchava/utsava murthy (festival deity) of Srirangam Ranganathar Swamy Temple, known as ‘Namperumal’, visits the Kaatazhagiya Singaperumal Temple every year on the Vijayadashami day (tenth day of Navratri festival). Namperumal from the Srirangam temple is brought through the Eastern Vellai Gopuram in a 'palakku' (palanquin). On reaching the Singar Koil, Namperumal adorns the outer mandapam of the temple from morning to evening where special poojas are performed. 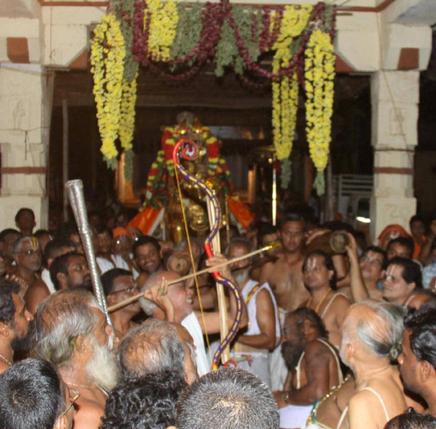 Evening festivities commence when the sacred bows made of cane and arrows were brought on an elephant through the Chithirai Veedhi of Srirangam. Around 6 PM, Namperumal on his golden horse vahana is posed in front of the Vanni tree (Prosopis cineraria) for the grand event.

After poojas, the much awaited hunting episode is acted out in front of hundreds of thousands of people who usually gather at the Kaatazhagiya Singaperumal Temple with Namperumal releasing the arrows with brass heads in various directions, terminating the life of the Vanniyasura (forest demon), and ensuring the protection of the good.