It is a long-familiar fact that most of the historic temples and 'parihara sthalams' (remedial temples) are located in the malaikottai maanagaram of Tiruchirappalli in the southern state of Tamil Nadu. Starting from the world’s largest functioning Hindu temple in Srirangam (Sri Ranganathaswamy Temple) to the rare Sri Brahmmapureeswarar Temple, which is one among the very few Hindu temples in all of South India, dedicated to Lord Brahma. Tiruchirappalli is dotted with far-famed religious sites, across the length and breadth of the region, which receive scores of pilgrims from all over the globe, irrespective of the seasons. 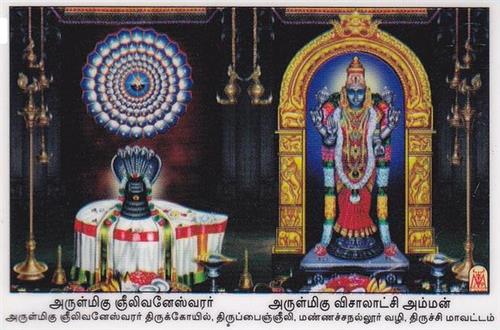 Thirupanjali Arulmigu Gneelivaneswarar Temple is one among the 275 Paadal Petra Sthalams and is popularly called as 'South Kailash' and 'Melai Chidambaram' by the devotees of Lord Shiva. This holy abode of Lord Shiva is intricately glorified by the Saiva poet-saints Thirugyana Sambandar, Appar Tirunavukkarasar Nayanar and Sundarar in their divine literary compositions. The Thirupanjali Temple is the 61st sivalayam, situated on the southerly bank of River Cauvery that is named in the Saiva devotional verse of Tevaram. Arulmigu Gneelivaneswarar (Lord Shiva), the presiding deity of this temple is a Swayambhu Murthy (self-manifested) deity and is called by several names which include 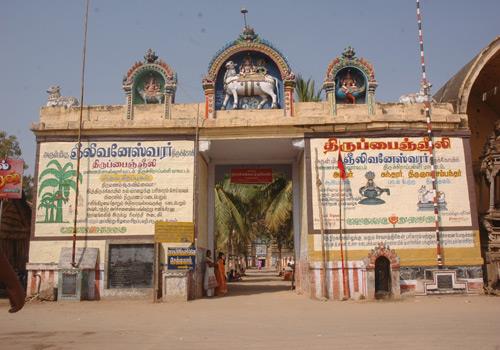 Legend has it that Lord Shiva defeated Yamadharman (Lord of Death) in Thirukadaiyur (Nagapattinam district, Tamil Nadu), in order to rescue the distinguished rishi Markandeya, from the grip of death. As the 'lord of death' Yamadharma himself lifeless, people were not subjected to death and the world turned overly populated. People stopped going to temple and poojas were stopped all over. Goddess Bhumadevi (Mother Earth) could not endure the burden of the Earth, which is full of immortal population. 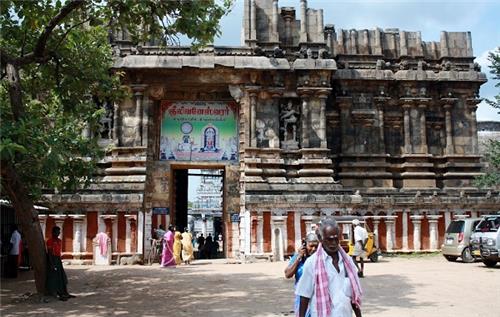 On the other hand, the Thirupanjali Arulmigu Gneelivaneswarar Temple was functioning as was common and daily poojas were not discontinued at all. Hence, Goddess Bhumadevi along with the creator and protector of the universe, Lord Brahma and Lord Mahavishnu and several other devotees of Lord Shiva visited Thirupanjali temple. They pleaded Lord Shiva to give rebirth to Yamadharma. Their prayers were answered that Lord Shiva offered a new birth to Yamadharma on the day of Thaipoosam, through 'pilathuvaram'. 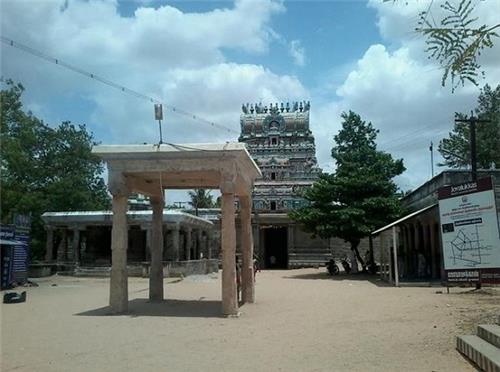 There are several others who received blessings of Lord Shiva in this temple, who include Lord Indra (King of the Gods), Kamadhenu aka Surabhi (Mother of Cows), Sheshanaga aka Adishesha (King of all Nagas), Lord Vayu Deva (Lord of the Winds), Lord Agni (god of Fire), Lord Rama, Arjuna (3rd of the Pandava Brothers), Saint-poet Appar, Sage Vashishta, Soothamamunivar and so on. The main temple tower (rajagopuram) of this temple was constructed by the Pandyan king Sundara Pandyan and the tower is not completed fully.

The second tower is called as the 'Ravana Vayil' and just before the entrance is the rare shrine of Yamadharma. The lord of death is in the form of a child as he got his new birth here. The Yamadharma sannadhi is in a cave under the ground level. Devotees offer special poojas to Yamadharma, seeking longevity. Another small sannadhi of Lord Shiva is located close to the second temple tower and the deity here is called as Sorudiya Eswarar. Another unique feature of this temple is that there is no separate shrine for Navagrahas is found. The nine steps leading from the second temple tower are regarded as the Navagrahas that were at the dictation of Ravana.

The primary deity of Gneelivaneswarar (Lord Shiva) offers his blessings in the sanctum sanctorum and there are two separate sannadhis present for goddesses, Arulmigu Visalakshi Amman and Arulmigu Neela Nedunkann Amman. There is a separate sannadhi for Ravanan is also present in this temple.